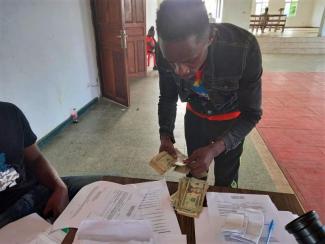 Monrovia, Amsterdam, 25 October 2021 – On Wednesday 20th October, sixteen victims of wrongful dismissal received over Thirty Five Thousand (35,000 USD) in financial compensation. The wrongful act was committed by Golden Veroleum Liberia, a palm oil company controlled by Singapore listed Golden Agri-Resources after the local community members from Butaw protested against the company back in 2015. The case stands for a sign of hope and sets a precedent for Liberians and communities in other countries that resist rights violations and destructive practices from the multinationals occupying their customary lands.  Moreover, this victory will serve as a deterrent for other concessionaires and encourage them to recognize the rights of local communities.

Local community members from Butaw, Sinoe County, Liberia, protested against rights violations by Golden Veroleum Liberia in 2015. They were arrested, tortured, beaten and sixteen community members spend one year in prison, where one of them passed away. They were released on a bail when no evidence was found to substantiate the complaints, but GVL did not accept them back in the workforce. As a result, they did not receive salaries even though they were not formally sacked. To this day, this loss of income and reputational damage has a huge negative impact on their families and livelihoods.

After trying a range of strategies, without achieving redress for this painful injustice, the victims asked lawyers to represent them and requested a meeting with Golden Veroleum Liberia in 2020. When the company did not accept the request, the case was subsequently filed with the Labour Ministry of Liberia. After a long process, the parties agreed on a financial compensation of Thirty Five Thousand Five Hundred Forty One ($35.541 USD) for the victims.

Sampson Williams from Sustainable Development Institute welcomes the financial compensation, stating that: “After many years of struggles and a process with the Ministry of Labour that Golden Veroleum Liberia constantly dragged and undermined, the victims finally achieved some level of justice and compensation. Thanks to the efforts of the Ministry of Justice, the Heritage Partners and Associates Law Firm and the victims that tirelessly withstood the aggressive stance and continuous attempts to delay the process from Golden Veroleum Liberia’s lawyers.”

James G. Otto, from Sustainable Development Institute cautions that “It is time that corporate institutions uphold the United Nations Guiding Principles on Business and Human Rights and commit themselves to respecting the rights of locals. Our government needs to ensure that corporate institutions comply with laws and international best practices.”

Sunday Okusu Sackor, one of the community members that received the financial compensation “We hope that this victory can inspire others to join forces with lawyers and civil society to stand up and use all legal means to achieve access to justice. It was a long journey since 2015, but finally we have some compensation for the wrongdoings against us. We will continue to demand the company to improve its practices and where necessary request the government of Liberia to step in and ensure our rights are protected and promoted.”

Danielle van Oijen, from Milieudefensie says: “This struggle is connected to thousands of other struggles from communities and activists around the world against the system of industrial monoculture plantations. The victory can inspire others to stand up and claim their rights. But the plantation sector is known for its structural rights abuses and environmental harms. This week, governments have a chance to fix that and negotiate for a strong UN Binding Treaty on Business and Human Rights that provides access to justice.”

Local communities affected by the plantations from Golden Veroleum Liberia have filed several complaints over the past years in collaboration with civil society organizations. Two complaints are still running. One with the Roundtable on Sustainable Palm Oil (RSPO) about the lack of free prior and informed consent from communities and environmental studies. In another complaint procedure, the High Carbon Stock Approach determined GVL should provide remedy for clearance of potentially one thousand hectares of valuable forest.