This report highlights China Union’s slowness in living up to provisions of its agreement with the Government of Liberia, pointing to widespread dissatisfaction in Fuamah District, Bong County with the company’s operations and its abusive treatment of Liberian workers. SDI called on the Government of Liberia to press China Union to ensure that it fully complies with the terms of its Mineral Development Agreement with Liberia and that allegations of violence against Liberian workers are addressed and that violators are punished. 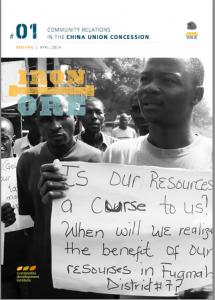