Peace and Prosperity for Liberia: A People-Centred Land Rights Act

The draft Liberian Land Rights Act (LRA) has the potential to become a fundamental law to the creation of a peaceful future for the country – improving the lives of over 3 million Liberians, reducing poverty, promoting sustainable development and protecting the country’s forests. However, unless major changes are made to the current version that is in the hands of Senators, this historic opportunity will be lost. In fact, the current draft of the LRA - passed by the Lower House of Representatives in August 2017 – undermines the land rights of rural women and men, opening up their land for grabbing by more powerful actors. This is in open contradiction to the 2013 Liberia’s Land Rights Policy, the 2009 Community Rights Law, and international consensus and guidelines on land governance by both public and private sectors.

Liberian civil society is voicing concerns over the current draft of the LRA and recommends Liberian leaders revise it to align it with the African Union’s Framework and Guidelines on Land Policy, the UN Declaration on the Rights of Indigenous Peoples, the UN Voluntary Guidelines on Responsible Governance of Tenure, and the Sustainable Development Goals. In the coming weeks, the Liberian Senate and government have a historic opportunity to improve the lives of their people and to act as leaders and beacons of peace for West Africa. All they have to do is pass a people-centred version of the LRA. 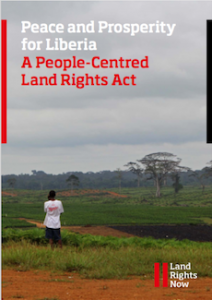